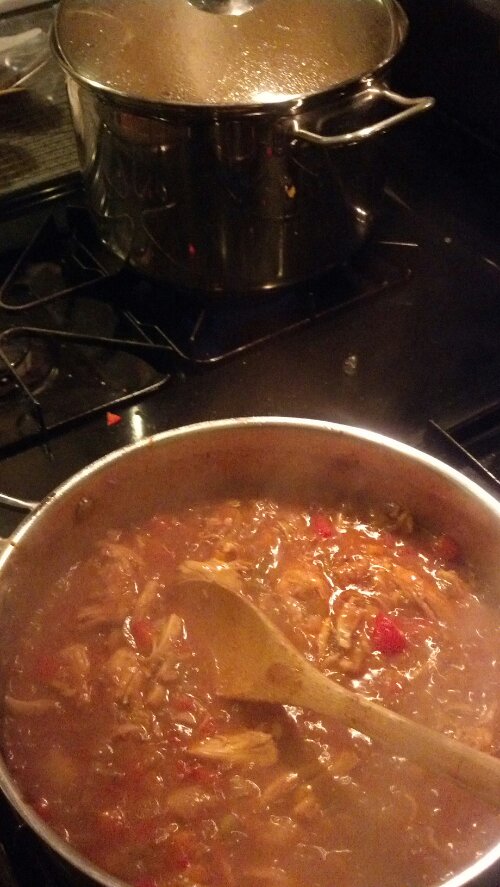 Its a rainy, cold Spring day here in the DC area. Perfect day for boiling pots and some kitchen prep. A good friend of mine bought me some fresh ginger root, so I peeled about 3 lbs of it, cut it into coins, and set it to simmer with 4 cups of organic sugar, a bouquet-garnis, which is a sprig of fresh herbs tied up in cheesecloth, and a half cup of filtered water. You pull out the herbs, blitz the syrup with an immersion blender, and strain it to get an intense ginger syrup for flavoring all sorts of things. Dark and Stormy cocktails are a good thing.

Now onto dinner. I had half a left over roast chicken which I pulled and shredded, not too fine, sort of rustic. I diced 1 and a half peppers. half red, half yellow and half orange. The other half was cut into fajita strips, bagged and frozen. A tomatillo, diced. Three baby Vidalia onions, diced. One shallot, cut into crescent slices, three cloves of garlic, peeled and sliced, and a lemon and a lime. I microwaved those for a minute after poking a few holes in them to make them easier to juice and squeezed them into a wire mesh strainer to catch the seeds

The garlic cloves go into a hot sautee pan with olive oil. Once the garlic starts to brown, fish it out with a spoon and discard. Just the garlic. Not the oil. Now toss in the vegetables and let the onions soften and brown a bit. Put in your lemon and lime juice and put in about a quarter teaspoon of ground cumin, and half a teaspoon of thyme. Dump in your shredded chicken and a full bottle of beer. I like IPA for this. Squeeze in a squirt of honey, and half a bottle of good barbeque sauce. I like Stubbs. Now pour in half a cup of chicken stock, and let simmer until the sauce thickens. Salt and pepper to taste.

Toast 3 Torta rolls, sliced, and shred about a cup of a good sharp cheddar cheese. 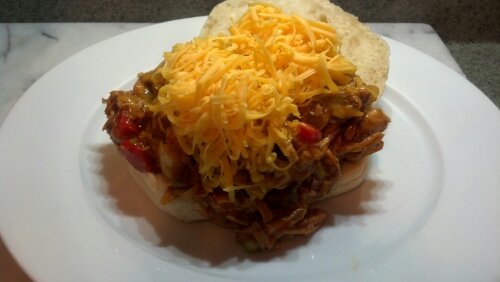