One of the luxuries of a stay-cation when you like to cook is you can eat brunch whenever you decide to hoist your ass out of bed.

PBJ Panatone French Toast, Veg and Ham Omelette and Fast-Steamed Tarragon Asparagus
Sophisticated cheap friends give Panatone for the holidays. Its a light Italian bread with nuts and candied fruit, similar in texture to challah bread. Slice it half an inch thick and set aside. In a bowl, add an egg, some whole milk, and some kentucky bourbon vanilla and half a teaspoon of sugar. spread the panatone with peanut butter and jelly and cut in half. Dip in the French Toast custard, and brown on both sides in a hot buttered skillet. Wrap in aluminum foil and put it in the warming oven.

Cut three tomatoes in half and take out the seeds. Slice them into crescents. Peel and french one cooking onion. Don’t tongue-kiss the onion. Slice it in half across the root end, then with the flat side against your board, make thin slices following the curve of the onion from root to stem end. Fiddle the crescents between your fingers and you have frenched onion. they should be about the same width as the tomatoes. Sautee them in a medium hot butter and olive oil skillet with some pepper and dried thyme until the onions are a little translucent. Set aside.

Get some sliced ham and cut it into ribbons. shred your favorite cheese. I like smoked gouda.

Put three teaspoons of tarragon vinegar in a microwave safe dish with a few asparagus spears and microwave uncovered for a minute 30 seconds and sprinkle lightly with sea salt.

In a hot omelette pan, add butter and olive oil to coat, then pour in two eggs you have beaten with a little water. Move the edges of the omelette so the yolk gets to the hot pan and so you can be sure its not sticking. Put your tomato and onion, shredded ham and cheese, and a little salt and pepper, and gently plate your omelette with your side of tarragon asparagus. Get out your French toast on a side plate and top with a pat of butter and real maple syrup. 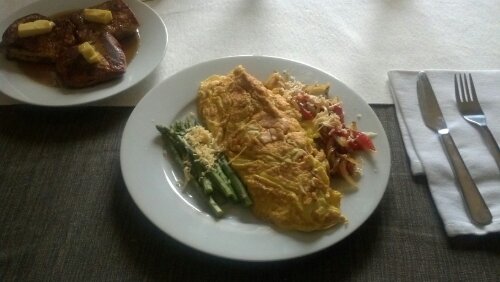 Avid foodie and kitchen tinkerer, artist, news junky and political wonk, musician, blogger, naturist, dog-daddy, and owner of a kinky play-space. ...and did I mention I'm single ;)
View all posts by gojohnego →
This entry was posted in Cuisine. Bookmark the permalink.