Since there was a smaller group planned this year to come to my house for Thanksgiving, and the group set to come isn’t completely stuck on the same dishes served year after year, it gave me a chance to edit the menu a little bit and try out some new techniques.

I’m not a fan of cutting up the bird at the table. Its a lot of work after a long day of cooking and generally a bird big enough to feed a crowd takes up an awful lot of real estate on the dining table. This year’s solution: preparing individual boneless portions.

Prepare a clear work surface somewhere near the kitchen sink. When working with raw meat and knifes and mallets, you don’t want any accidental splatter contaminating ramekins of kitchen tools or other brick-a-brack on that counter top. Clear it away.

I bought an 11 lb  (5kg) fresh turkey breast from Harvey’s, a local butcher here in the Washington, DC area. Since making the decision to eat less meat, so I can spend more money on quality cuts, developing a relationship with a knowledgable butcher is a must.  As for why only a breast portion, those who come to my table rarely seem to be interested in eating the turkey legs and since I’m not a huge fan of turkey soups or making stock from them, I decided to forgo them this year, and just get the breast cavity.  With a very sharp knife, I cut down the center of the cavity and along the contour of the rib cage, scraping along the bone while holding the meat away from the knife. I was able to come away with the two breast portions with the skin intact. I then took the sharp knife and removed the skin in a single piece per half and put that in a plastic bag with some water to keep it pliable.

You can save the carcass and make turkey stock from it. I don’t. Not a fan of the amount of collagen and that wibbley jelly-texture that always seems to set up on the cooled stock. You can also save yourself some trouble and ask your butcher to de-bone the breasts and leave the skin on them for you. (Develop a good relationship with your butcher and you’d be surprised at all the stuff they can do for you)

The reason I took the skin off, is I’m cutting the breasts into 8 individual portions about the size of three decks of playing cards stacked on top of each other. Each of the portions went into a ziplock back and was flattened down to about a quarter inch thickness with a good tenderizing mallet. If you leave the skin on during this process, its a lot more likely to tear and because you want the skin in one piece, its best to remove it and set it aside in this part of the process.. Glancing blows work best – thats where you hit the piece of meat in a diagonal blow and rotate the meat as you do it to create a nice wide, flat cutlet.  Put the bags in a 9×12 pan and put them in the fridge.

Combine your toast cubes, the contents of the sautee pan, and the savory custard mixture and let stand for an hour in the fridge to allow the bread to absorb the fats and liquids.

To assemble, get some butcher’s twine and cut 12-2 ft long lengths. Take a flattened turkey cutlet and put it on your clean work surface. With an ice cream disher, scoop out a serving of the dressing and place it slightly off center on the cutlet. With a rubber spatula, spread out the dressing to 2/3 of the area of the cutlet, leaving one third uncovered. Sprinkle a pinch of salt, a few grinds of black pepper, and some dried sage over the surface,  fold in the ends and roll it up, then place it seam side up on your work surface, From the reserved turkey skin, cut a portion big enough to cover seam and the top surface of the roll. Then secure your package with butchers twine.

Preheat your oven to 400 degrees.

Once you have two left to roll. put a skillet on medium high heat with olive oil and butter. it should be smoking slightly by time you are finished rolling your turkey. Brown all sides of your rolls in the skillet.

Add some more butter and olive oil to that pan so you have about a quarter cup of fat bubbling away. Then get yourself a quarter cup of flour and sprinkle it over the fat. Get out your whisk and scrape the good brown stuff off the bottom of that pan while the flour browns. When the flour reaches the color of coffee with a lot of cream in it. Add a cup of stock and keep stirring with that whisk until the contents form a paste. Add a second cup of stock. This will smooth out and thicken into a very nice pan gravy.  Drop it down to simmer and add a quarter cup of white wine, and let it simmer, covered, while your turkey roasts away in the oven.

There will likely be dressing left after you finish with your chores. Put that in a buttered baking dish and cover with aluminum foil. Nestle the turkey into the washed 9 x 12 baking pan. Sprinkle each of the packages with olive oil, and bake uncovered for about an hour. Check with a meat thermometer to make sure the core temperature is no lower than 160 degrees Fahrenheit  (71 degrees celsius). Make an aluminum foil tent covering for your pan, and let it sit for at least 30 minutes under cover before you serve them. Cut the twine away and plate up.

I made a green salad with seeded, peeled cucumbers and sliced campari tomatoes, dressed in a ginger orange vinaigrette, a baked macaroni and cheese, a slice of the baked dressing,  mashed potatoes, and my youngest sister bought along some spicy glazed carrots and garlic cream green beans.

Next up – dessert and drinks. 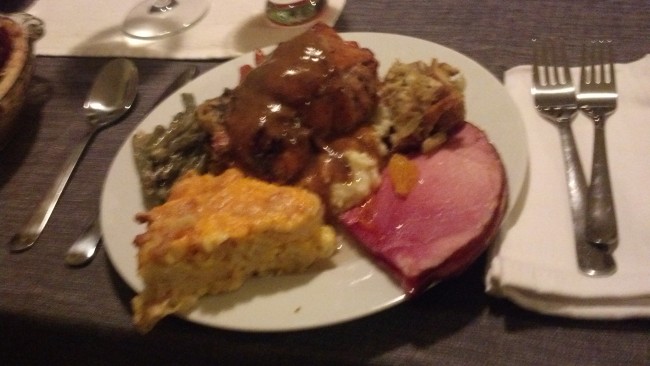