Cuisine. Neither Dutch nor babies. 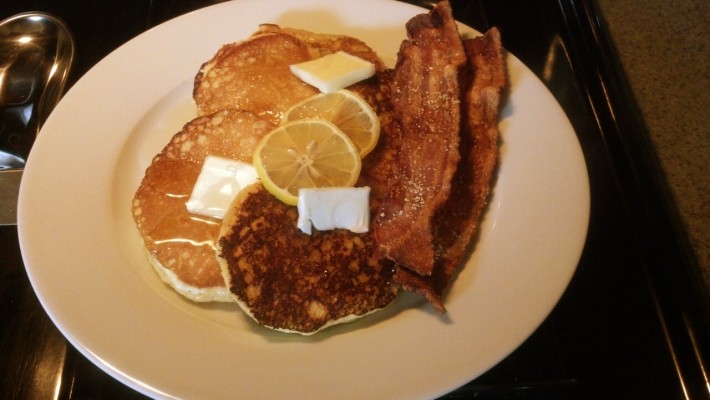 Last night in preparing to make some citron syrup for today’s afternoon margaritas, I started thinking about Dutch babies. If you’ve never had them, you should try them. Its basically a pancake, but sweet, and lemony and light and delicious.

To make them, you sift half a cup of AP Flour together with half a teaspoon of baking soda and couple pinches of salt and set that aside. In another bowl, get out your whisk (I told you to buy a whisk before. You still didn’t get one? Really?)  and whisk a nice, fresh egg and a quarter-cup of sugar together, but don’t just dump the sugar in all at once. Pour some and whisk and a bit more and whisk some more. What you are trying to do is make the sugar melt into the egg while you are beating in air. You want the egg to be a few shades lighter and sort of custard-y. Set that aside.

Heat up your skillet now. Don’t butter it yet or you’ll smoke up the kitchen.

Get your microplane and zest one lemon (take off the skin but not the white part which is bitter), and juice it through a strainer into the bowl so you can avoid the really annoying task of picking seeds out of the eggy-sugar-y foam. Whisk some more until the lemon is incorporated into egg mixture.

Drop some water on the skillet. If the drops sizzle, you’re fine. If they dance and jump off the skillet, turn it down. Now butter up the top of your skillet (or use some of that depressing cooking spray if you are on a diet restriction. …sigh) Get out your rubber spatula and fold the dry into the wet ingredients. The baking soda will start to react and immediately start to make the batter really fluff up. Get out a small ice cream disher and drop 1/4 cup  (2oz.) pancakes onto the hot skillet. These will cook really really fast, so don’t wander off. After about 30 seconds, lift an edge. If they are brown, flip them. If they are black, remove them to the garbage. You wandered off, didn’t you? …sigh.

I served mine with maple bacon (cook bacon on a cooling rack over a sheet pan and sprinkle with maple sugar while the fat is still foaming on the crisped bacon), butter (of course), and some of that citron syrup I made last night for this afternoon’s margaritas.

To make the syrup, you need two cups of sugar. I like organic when possible but use regular cane if that’s what you have on hand. Zest a lime and a lemon into the sugar. Squeeze about 8 limes and 3 lemons, making sure to remove the pips. Pour the juice into the sugar and heat on the stove until the sugar dissolves completely and makes a nice rich syrup. Don’t stir it. That will form crystals in your syrup and make it all grainy. Set it aside, maybe in one of those nice mason jars you bought to can stuff but never got around to using, and let it cool.